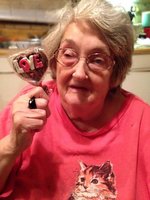 Joan Marcum, 85, of Fort Gay, WV passed away Friday, July 2, 2021. Joan was born August 22, 1935 in Glenhayes, West Virginia to the late John and Elizabeth York Branham. In addition to her parents, she was preceded in death by her husband Grover C. Marcum, and  one son Bobby Marcum.

She was a Homemaker.

Funeral services will be conducted at 2:00 PM Tuesday, July 6, 2021 at Glenhayes Baptist Church in Fort Gay, WV with Rev. Ronnie Maynard and Rev. Ellis Maynard officiating. Burial will follow in the Marcum Cemetery on Lost Creek Road. Friends may visit the family on Monday, July 5 from 6-9 PM at the Glenhayes Baptist Church. All care has been entrusted to Wilson Funeral Home.