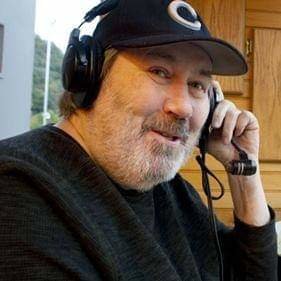 Lloyd was a friend to all, he was in essence a family member to every high school in Buchanan County. The good Lord knows that we fed him enough over the years to constitute making him an honorary member of our families.

Lloyd would have appreciated that line.

Born unto W.A. Combs  and Gayle Victoria Combs, on December 15th, 1952, Lloyd grew up in a loving home, he often spoke of his parents and expressed his sadness and emptiness that he felt with their passing. In many of Lloyds Front Row columns he would often mention his mother and father, his unending love for both of them was evident through his writing and his conversations. For years following their death Lloyd would take an annual walk on Christmas morning along the beach in Jacksonville, FL and reflect on the time that he had with them. This became an annual ritual until his health no longer permitted him to do so.

Lloyd discovered at an early age, a passion for sports, although he admitted that he was not the most athletic, he enjoyed playing and following a wide variety of sports. An avid basketball and football fan, Lloyd was a loyal supporter and fan of the Green Bay Packers, North Carolina Tar Heels,  Cleveland Browns and his beloved Cincinnati Reds. Despite his passion for many football and basketball, it was no secret that baseball was Lloyd’s first love, he credited his father for his love of the game. With his influences coming from  late night play by play announcers on radio, Lloyd was destined to become a sports reporter/broadcaster, he just didn’t know it at the time.

Born and raised in Logan County, WV, Lloyd moved with his parents to Buchanan County during his middle school years, after a brief stint at Oak Hill Academy he eventually returned and graduated from Grundy High School. Just in case you were wondering, no, Lloyd did not attend Oak Hill Academy to play basketball, however he may have been the one to start the trend. Lloyd later went on to attend James Madison University, where he graduated with a Bachelor’s Degree in Radio and TV Communications in1976.

Throughout his college years and thereafter Lloyd found himself drawn to the music of singer songwriters such as John Prine, James Taylor, Jackson Browne, Tom Rush and Bruce Springsteen. Lloyd, loved a good harmony and often waxed nostalgic about his days as a D.J. at WMJD. Lloyd even tried his hand at music, playing and recording songs on an old cassette player, he once let me listen to a homemade recording he and some friends made several years ago. I now know why Lloyd didn’t pursue a career in music. Regardless, he was a romantic when it came to sentimental songs about life, conversations and people we meet on our journey. It’s worthy of a trip to his Facebook timeline, just to capture the type of music that he shared with friends and family. You can find out a lot about the type of person that he was deep down inside, just by listening to some of songs that he shared.

In addition to his passion for music, he ventured into politics, well sort of.  Lloyd volunteered on the George McGovern campaign and often spoke about his exploits and experiences while promoting the former Presidential candidate. I often told him that he was McGoverns answer to Nixons, G. Gordon Liddy. Fortunately for Lloyd, Liddy went to prison and Lloyd went to work covering high school sports. Thank God that he never ended up at the Watergate Hotel.

Throughout the years, Lloyd Combs immersed himself in the Southwestern Virginia sports scene. He found employment, writing and covering sports for the Virginia Mountaineer, as well as a weekly column, a decision that Editor Lodge Compton would never regret. That along with his partnership with WMJD, helped solidify him as the voice of high school sports in Buchanan County. He would expand his services to later include the Bristol Herald Courier and the Bluefield Daily Telegraph making the name Lloyd Combs a household name throughout our region and Commonwealth. Lloyds coverage of high school athletics allowed him to befriend fans, athletes and coaches throughout the region, his familiar face could be seen in gyms, press boxes and dugouts on campuses everywhere. The Bible teaches us that in order to have friends that we are to first show ourselves friendly, I suppose that is why Lloyd always felt at home, no matter where he went, he was always amongst friends.

Lloyd eventually added the title of Author to his resume as he finished three books, all related to high school sports in Buchanan County. In the coming years, these works will serve as a time capsule, of memories, historical records and lore. If you have a signed copy of one of these jewels, consider yourself fortunate.

In the final years of his life, things took a turn for the worse for Lloyd, he suffered a debilitating stroke and never was able to fully recover. However, this never stopped Lloyd, only days removed from the stroke, he was on the phone, taking stats, getting quotes, selling radio ads and planning on how to get to the next game. His resiliency during this trying time would become his greatest legacy. With the sticktoitiveness of Charlie Hustle, Lloyd headed around third base with his eyes up and his head down, determined to take on this new obstacle like a pitcher blocking home plate. Although he never physically recovered, he never stopped fighting. Lloyd Combs was a winner, that’s what winners do, he never gave up, he pursued his calling in life and refused to let something like a stroke get in his way. Lloyd crossed home plate and brought home the run.

Several years ago, Lloyd traveled all the way to Dyersville, Iowa, to a tiny corn field on the farm of Don Lansing. The sight of the field in the movie “Field of Dreams.” If you have seen the movie and if you love baseball, you understand the significance and importance of such a pilgrimage. Some of you may have seen it, there is an old grainy photo of him standing at the edge of third base along a tall line of corn, that photo is etched into my memory.

I would like to imagine that somewhere out there, there is a place, it’s not in Dyersville, Iowa, you can’t even find it on a map. But, something tells me that Lloyd Combs is there, he is standing near third base along a row of corn, he has his notepad out and he is waiting to interview “Shoeless,” Joe Jackson and when he is done, he is gonna play a game of catch with his dad.

To send flowers to the family or plant a tree in memory of Lloyd Combs, please visit Tribute Store
Thursday
21
January

Share Your Memory of
Lloyd
Upload Your Memory View All Memories
Be the first to upload a memory!
Share A Memory
Send Flowers