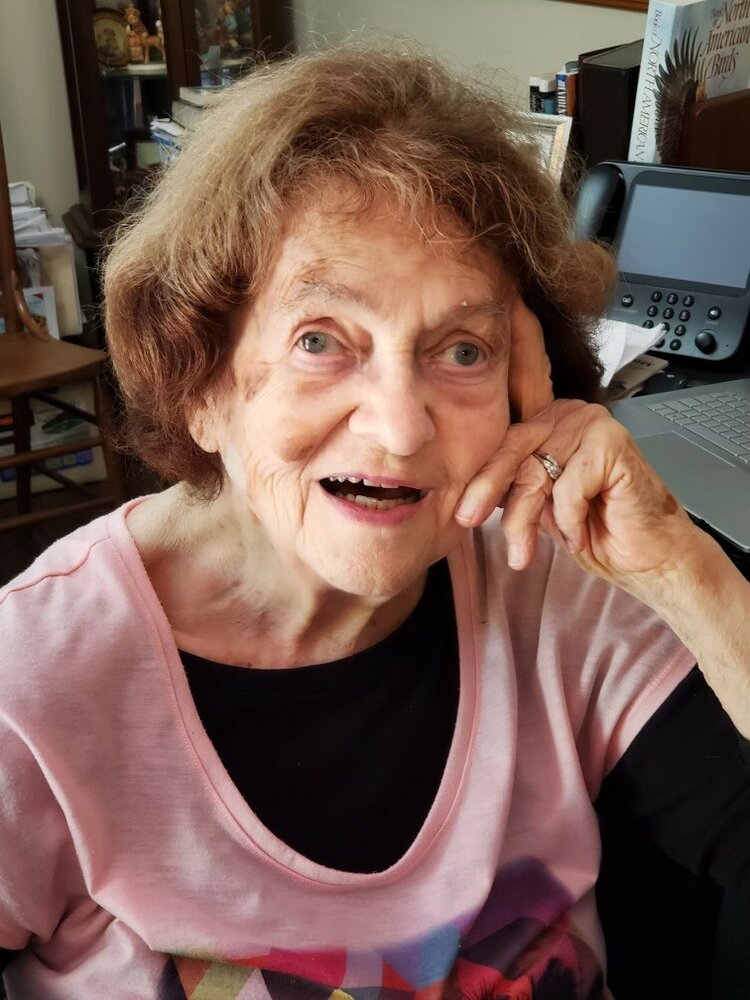 Please share a memory of Jean to include in a keepsake book for family and friends.
View Tribute Book

Jean Dee, beloved mother, grandmother, great-grandmother, sister, cousin, aunt, and friend, left her earthly body on December 2, 2022 at age 90. If there is a heaven, as she truly believed, she has joined her husband Warren Dee, son David Dee, parents Edward and Gertrude Blackford, sister Doris Pugh, and others she loved.

Jean grew up in Wausau, Wisconsin, and later graduated from Carroll College in Waukesha, Wisconsin. She aspired to be a missionary, but her Spanish major led her to work in a Presbyterian school in Cuba. While there she married Warren Dee, who was being sent to France with the US Army, and Jean joined him there several months after their marriage. After returning to the US, she worked as a Christian Education Director, taught second grade for many years, and raised their 3 sons, David, Steve, and Jeff, in Cary, IL. Later she followed in Warren’s footsteps by attending Garrett Theological Seminary where she earned a Master of Divinity degree. She and Warren served United Methodist churches in the Chicago area, Wisconsin, and finally Kentucky. At age 76, After Warren’s death in 2008, Jean began teaching Spanish at Lawrence County High School in Louisa, KY and did so for 2 years.

Throughout her life Jean loved to travel, loved to read, and loved music of many genres including opera, folk, classical, bluegrass, and even some rock. She had a wide range of interests including theology and theoretical physics, but she was the first to admit that she didn’t fully understand the latter. Several years ago she became interested in genealogy, traced her maternal family history, and wrote a historical fiction book about that family. Most recently she had almost finished writing a book about her experiences in Cuba and the people from La Progresiva who had moved to the US.

She loved her family and was especially thrilled with the arrival of great-grandson Adrian in July. She loved her friends and kept in contact with friends in France, Germany, the UK, and in the US. She remained especially connected with those associated with La Progresiva School in Cuba, who had moved to the Miami area and started a new school with the same name. She was active in First Methodist Church of Louisa, KY where she had many friends.

Jean will be remembered as a force for the positive, for hope, and for love. Indeed, Jean exemplified a life well-lived.

A memorial celebration of Jean’s life will be held at noon on Tuesday December 13 at First United Methodist Church of Louisa, KY. Friends and family may also visit from 3 to 7 pm on Monday, December 12 at Wilson Funeral Home, 1270 Highway 2565, Louisa, KY.

In lieu of flowers, the family requests that donations be made to either:

or to a charity of your choice.

To send flowers to the family or plant a tree in memory of Jean Dee, please visit Tribute Store
Monday
12
December

Share Your Memory of
Jean
Upload Your Memory View All Memories
Be the first to upload a memory!
Share A Memory
Send Flowers
Plant a Tree